Mushrooms have become incredibly popular worldwide. According to a report published on BusinessWire.com, the global mushroom market was valued at over US$ 53 billion in 2019.

The rise of health consciousness among consumers, the trend of veganism, and the incredible growth of the food and beverage industry are the main driving factors behind the amazing worldwide popularity of mushrooms.

Want to learn more? Let’s take a look at what makes these mushrooms special.

What Are Golden Oyster Mushrooms?

The golden oyster mushroom is also known as the yellow oyster mushroom among hobbyists and “tamgitake” in Japanese. It is an Asian species of the oyster family that is most popular among growers for its vivid, impressive yellow-colored caps and its unique cashew-like flavor.

This mushroom is renowned for its medicinal properties, which is usually the norm for most members of the oyster mushroom family. Additionally, golden oyster mushrooms also have significant potential for mycoremediation – the process for growing fungi in contaminated substrates so that the end product is biologically processed resulting in the removal of contamination. 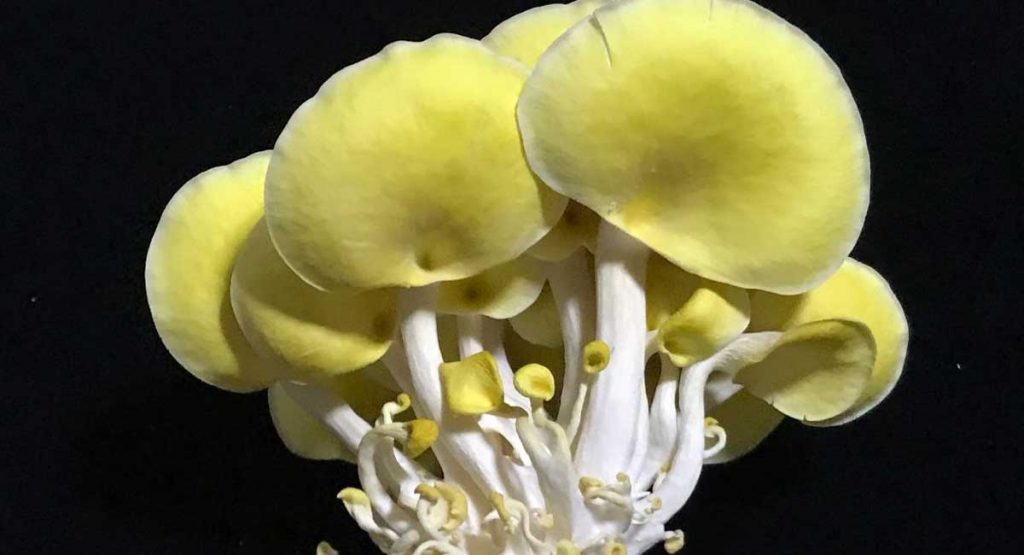 How to Identify Them

The fall and winter are the ideal seasons for golden oyster mushrooms to flourish in the wild, however, growers have been found to regularly cultivate the harvest around the year.

These are the signs that help to identify golden oyster mushrooms. Let’s hope you can spot the mushroom on your next trip to the woods.

How to Cultivate Them

Hobbyists and commercial growers are equally enthusiastic about growing golden oyster mushrooms. If you, too, are planning to grow them, then we recommend that you go through the details below. We have outlined the essential factors that can help to successfully grow golden oyster mushrooms and prepare them for the ideal harvest. Be sure to use a mushroom knife for your bounty.

The oyster family of mushrooms contains numerous species. Years of intense research have found incredible benefits of eating this mushroom variety. There have been significant breakthroughs in treating several physical ailments and medical disorders by adding oyster mushroom extract or powder to the medicine. Although there might be slight variations in closely-related species, the benefits provided by the oyster family of mushrooms are undeniable. 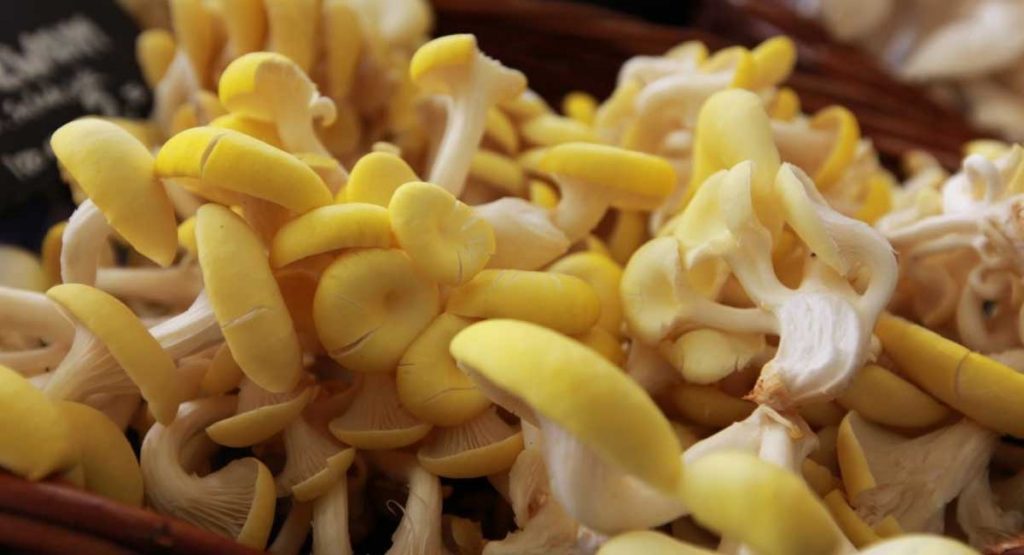 The golden oyster mushroom variety is an essential ingredient in many traditional Asian medicines for treating issues of the immune system.

Some of the most amazing benefits of golden oyster mushrooms include:

Although most edible mushrooms may not have many nutrients and are mostly used for the extra flavor, the golden oyster variety does provide incredibly important nutrients. These mushrooms are low in cholesterol and fat and high in protein and fiber along with minerals and vitamins.

Some of the major nutrients in golden oyster mushrooms include:

Together, these nutrients make the golden oyster one of the most powerful anti-oxidants on the market. This makes golden oyster mushrooms the top choice to not just add flavor to a healthy, well-balanced vegan meal but also provide nutrients without unwanted, additional calories.

Golden oyster mushrooms are known for their negligible cholesterol levels, lower triglyceride levels, and a higher level of healthy nutrients. Various studies have shown that there are specific chemicals in the mushroom which activate the enormously beneficial effects.

Additionally, this mushroom is also incredibly powerful to lose extra, unwanted weight as it promotes fat loss without compromising on meal portions.

improve glucose tolerance, which can be extremely advantageous for diabetic patients as a form of treatment.

Diabetes is caused when the body is unable to produce a sufficient amount of insulin. Calcium is one of the major factors that the body needs to produce insulin while vitamin D is responsible for reducing inflammation and raising insulin sensitivity in the body. Research studies have proven that vitamin D helps to prevent Type 1 and Type 2 diabetes successfully.

Vitamin B3 is responsible for balancing triglycerides and cholesterol levels and reducing atherosclerosis which results from the inner walls of the arteries getting hardened. This is the major cause of heart attack, which is the most common cardiovascular disorder in the world today.

Golden oyster mushrooms contain sufficient amounts of vitamin B3 which helps to lower the production of histamine, improving blood circulation and preventing inflammation in the artery system. This is an incredibly efficient way to prevent the onset of cardiac arrest, especially for those who have already suffered once. In addition, vitamin B3 is also helpful in treating pellagra, which is a disorder caused by a deficiency of niacin in the body.

Research has shown how copper has a significant impact on neurotransmitters, such as dopamine and galactose, which are responsible for maintaining the balance between energy, mood, and focus in a person. Lack of sufficient levels of copper in the body often causes a drop in metabolic activity, upsets mood, disturbs concentration, and results in constant fatigue.

Copper is also known to use the antioxidants (such as vitamin C, ascorbate oxidase, tyrosinase, and superoxide dismutase) to prevent damage from free radicals in the brain and also to slow down the aging process, apart from helping to prevent cancer and numerous neurodegenerative disorders.

Golden oyster mushrooms contain enormous amounts of different vitamin Bs. Vitamin B is responsible for transforming carbohydrates into glucose, which in turn provides energy to the body. This vitamin is also known to metabolize fats and protein. In addition, vitamin B5 in the golden oyster mushroom helps to rebuild organs, tissues, and muscles apart from maintaining an optimal metabolism level in the body.

A special substance in the golden oyster mushroom’s fruiting stage has proven to slow the growth of human leukemia cells during research studies. The in-vitro studies figured that a form of glycoprotein, and not a lectin, is responsible for this effect.

The study has also found the way by which this glycoprotein interacts with cancer cells and restricts their growth.

Another research study, this time involving the use of water extract from the golden oyster mushrooms, found that it significantly shrunk tumors and reduced inflammation in test subjects.

A research study that isolated and used a form of glucosylceramide from the golden oyster mushrooms found it extremely effective in fighting against two potentially harmful disease-carrying bacteria. The substance is also being studied to discover its other abilities in making pharmaceutical anti-bacterial drugs.

Numerous research studies have discovered and proved the incredible anti-inflammatory properties exhibited by golden oyster mushrooms. As inflammation is an integral part of numerous disease processes, such as athletic injuries, anti-inflammatory medications are extremely important today.

Anti-inflammatory medications are normally used to treat severe disorders, such as asthma, auto-immune diseases, and cancer, among others. Thus, the beneficial extract of the golden oyster mushroom can be extremely helpful in preventing or treating several inflammatory disorders.

The body needs vitamin D to regulate blood pressure and keep it under acceptable levels. However, most people who live in cold climates have a deficiency of vitamin D. Hence, golden oyster mushrooms can act as an excellent way to keep your blood pressure low, under normal levels, and prevent an unexplained rise in blood pressure.

Golden oyster mushrooms contain magnesium and vitamin D, both of which are incredibly important for a strong skeletal structure. Although everyone knows that calcium is the best nutrient for building stronger bones, what they don’t know is that vitamin D and magnesium are essential to process calcium and store it in the bones to make them stronger.

Golden oyster mushroom contains the amino acid ergothioneine, a cryoprotectant that is responsible for protecting cells against the stress of oxidation and damage from free radicals. Thus, golden oyster mushrooms can be incredibly helpful in combating neurodegenerative disorders, such as dementia, Parkinson’s, and Alzheimer’s, to name a few.

Dermatitis is, unfortunately, one of the most common dermatological disorders worldwide. Tens of thousands of patients suffering from dermatitis are discovered every day around the world. Although there are a few treatment options available, these are usually expensive or extensive.

However, new research has shown that golden oyster mushroom extract is responsible for slowing down and inhibiting the symptoms of dermatitis. This makes golden oyster an incredibly important mushroom variety for potential use in cosmetics and skincare products.

Apart from helping to lose unwanted weight, providing important nutrients, helping to fight cancer growth and inflammation, there are several other benefits of using golden oyster mushroom in your diet, including:

Golden oyster mushroom and its extract products are sold for a variety of uses. Recent research has shown its incredible effects on the human body. As with any dietary supplement or food item, moderation is highly advised as too much of even something good can have adverse effects. 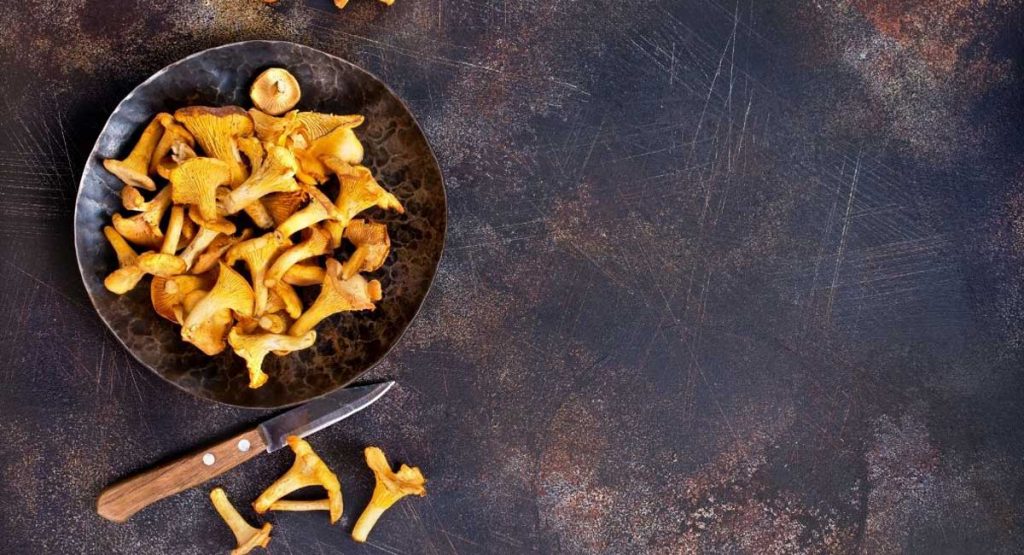 It is recommended to use golden oyster mushrooms in salads as taste additives and not make them form the bulk of the meal. Make sure to wash the mushroom with water before cooking. To use in salads, you can simply wash the mushroom in cold water, pat them dry with a paper towel and toss them straight into the salad bowl.

However, the firm part of the stem is not ideal for cooking so you can remove it before adding the mushroom pieces to the salad. On the other hand, the hard portion of the golden oyster mushroom stem is often used while cooking other recipes.

This mushroom variety deserves to be studied in-depth to discover much more of the health and medical benefits it may hold.